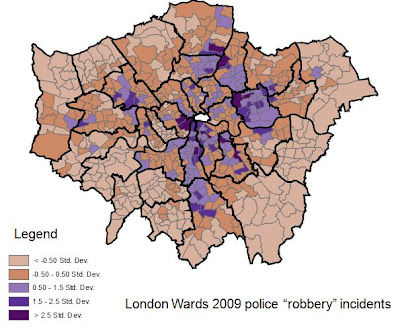 Back to violence. This is a map of robbery incidents. Let me explain in simple terms what a robbery is. It is a theft that involves the application of violence to an individual or individuals or threat of violence to achieve its purpose. Now because robbery, particularly street robbery is and has been for decades a police priority to reduce, only those where the final letter of the law is complied with find their way into the official crime statistics. Therefore you get pick pocket crimes that are simple thefts and bag snatches which most people would think of as a street robbery but in law is classed as a theft because the violence has been applied to the bag not the person carrying it. You can then get an assault followed by a theft and a theft followed by an assault which are not robberies. The use of a weapon to threaten potential violence is an armed robbery though there is no separator legal category for this in England and Wales.

But my data set of incidents is not quite so exacting as that, though it is normally based on the information given by the police officer initially investigating the case who would not have got through training school without learning the definition of robbery verbatim so it is likely to be broadly accurate.
Posted by Paul at Friday, September 24, 2010