Notes about the future

I attended an interesting half day conference yesterday organised by Prof. Mike Hough from Kings College London and Ipsos MORI Social Research Institute entitled "The Future of Criminal Justice. The Impact of New Policy, Fewer Resources and Public Influence" I am not a great note taker but these comments were the most significant to me.

Only 1 person in 100 thinks that we should have fewer police
Anti-social behaviour answers are a good proxy indicator of people's happiness
Only 14% of working class elderly are online
Posted by Paul at Friday, May 28, 2010 No comments:

I have just had a re-read of my previous post and apart from correcting the numerous typos I notice that I did not mention one of the main facets of my argument. One of dangers of writing a post whilst supervising a 20 month old grand-daughter!

This is of course is the fact that we are comparing recorded crime here. One of the differences between those living in high and low deprivation areas is the level of insurance cover. The more affluent, one assumes, will have insurance for household goods and the less affluent will not, a good area for research. Insurance can skew the figures in the same direction by two means. Firstly, as it is necessary to report a crime to police before gaining an insurance pay out, those who are insured a more likely to do so than those who are not. When I carried research into vehicle thefts about 18 years ago I presented evidence that at least 20% of all reported vehicle thefts were in fact insurance frauds. It is only those who are insured who can commit such frauds.

This means that there probably is an under-reporting of burglary in deprived areas and an possibly an over-reporting in affluent ones.

There is still much more I could write on this subject including why I treat police crime data as recording the public's demand and police activity rather being a measure of actual crime.
Posted by Paul at Tuesday, May 25, 2010 No comments:

The classfication of  recorded crime is complex. I will illustrate this by using the example of "domestic burglary". Burglary is a legal term which in itself is complex and defined in England and Wales by section 9 of the Theft Act 1968. In simple terms it is a theft that occurs whilst trespassing in a premises. If violence is involved then it is an aggravated burglary. Then there are legal definitions around what is and is not an attempted burglary. In legal terms there is no differentiation between domestic and non-domestic burglaries, this is where Home Office crime classifications come in. So a shed burglary in a residential garden is a domestic burglary but a shed burglary in a public garden is a non-domestic burglary. A distraction or deception burglary is classified by the Metropolitan Police Service as burglary artifice. Theft of car keys from a house to steal a car parked outside is a domestic burglary. If the car was stolen without entering the house then it is not a burglary.

My last post I discussed the differences between correlation of domestic burglaries with the IMD in inner and outer London.

Secondly crime commission theories are relevant here too. For a burglary to occur you need the interaction between a likely offender and a premises that they are capable of entering with minimum risk and a commodity to steal that makes their effort worth while. In London with its over 3 million households it only has about 60,000 reported domestic burglaries a year. This means that it only needs about 400 active burglars, commiting an average of 3 burglaries a week for this figure to be acheived.

Thirdly travel to crime theories should also be considered. Most burglars have a modus operandi that works for them. This will involve types of premises they will burgle, time of day and location. The location typically will be within a easy travelling distance from their home or other base but the higher the gain or rarer the desired target the more likely the distance travelled will be greater. Not really a lot different to a hunter/prey scenario.

There is a dynamic here (the Routine Choice Dynamic Theory is something I devised for my M.Phil which I will perhaps outline in a later post) that critically depends on the existance of an active burglar at a location. Therefore information of the locations of active burglars is perhaps equally interesting as where the crimes are occurring.

I could go on mentioning other factors such as drug addiction motivation and the varying performance of police but I will have to save them up for other posts. I will end by concluding that the higher population density and a the greater proximity of more and less deprived areas in inner London compared to outer London probably accounts for at least part of the differences in correlation.
Posted by Paul at Tuesday, May 25, 2010 No comments: 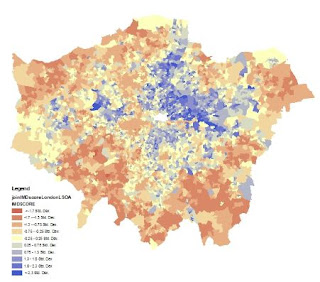 London showing Lower Super Output Area
Multiple Deprivation Scores using Standard Deviation
Firstly let me apologise for not updating this blog for a few weeks. A combination of factors have conspired to this happening not least of which ironically is having too much to write about. But anyway continuing on my train of thought where I left off. What is the relationship between deprivation and crime? Today I look at burglaries in people's home. A distressing crime and one that is a high priority to police and rightly so. And one which my analysis on fear of crime suggests is significant in people's perception of the police.
I downloaded this dataset of police recorded domestic burglaries because a colleague is studying house prices in London and wondered whether burglaries had an affect. I have approached it from a slightly different angle and looked at the correlation between deprivation and burglary. The statistics say no correlation when the two sets of figures are compared but I think when these map are studied interesting potential negative and positive correlations can be glimpsed that are perhaps cancelling each other out. 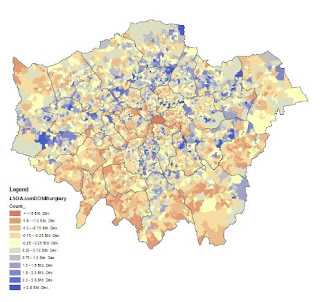 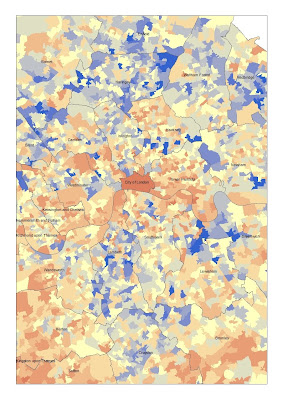 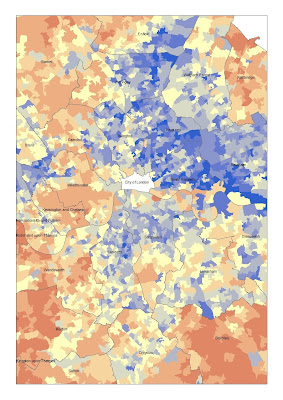 Inner London showing Lower Super Output Area
Multiple Deprivation Scores using Standard Deviation
Whereas Inner London hints at having a negative correlation especially in the boroughs of Islington, Hackney and  Tower Hamlets. I will discuss the reasons for this in my next post.
Posted by Paul at Friday, May 14, 2010 No comments: