A step too far for police patrols?

The above is a screen shot of a google map of central London showing in real time the locations of underground trains. You can actually see them move and by clicking on them more information is available. The link is here. I thank John Lahr, a former work colleague for drawing it to my attention.
It occurred to me that a similar website of uniform police vehicle locations and movements is also possible. Police vehicles have mobile data terminals that transmit GPS signals every 15 seconds. I have some of the data that I have plotted for Camden Borough. 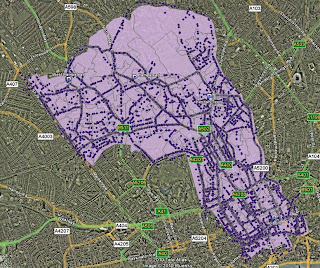 This map shows all the locations for a 24 hour period on Saturday 20th March 2010.

The above three maps show the hours of 21, 22, 23 00 hours, some of the busiest times in the week. It may surprise people how little cover there is.
What is not being shown is foot patrols. GPS signals are transmitted from foot patrolling officers personal radios but not stored so I have no access to that data. But it is feasible to plot both vehicle and foot patrols in real time.
Before you cynical people send me to an institution for the criminally naive on the basis that this would give the offenders all the information they need to commit crime undetected let us examine the facts. What is the purpose of police officers patrolling in uniform, often with high visibility jackets, and in livery vehicles with flashing lights and sirens? It is of course to be seen. The purpose of overt policing is to to be identifiable, to prevent crime, to reassure and to engage with the public. There is of course a role too for covert policing.
The more I think about it the more sensible it becomes.............................................................
Posted by Paul at Tuesday, June 22, 2010 4 comments: 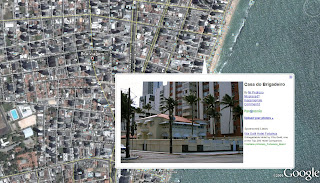 Yesterday CASA had an impromptu seminar from  Mauro Normando Macedo Barros Filho from Brazil (his blog is here). He gave an interesting talk about the spatial analysis of street robberies in Recife in Brazil.

Extreme cases are interesting from a researcher's point of view as it allows the mental testing of  hypothesis. In this case my model of fear of crime. I have shared it before but I do so again. 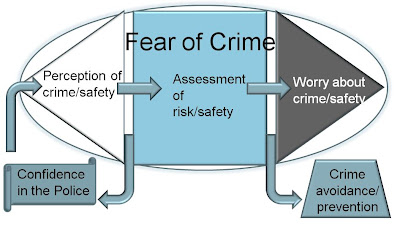 People base their fear of crime on their perception of crime. They apply that perception to their personal circumstances and take action to avoid or prevent that crime happening to them and who they care for. Now in Recife, interestingly even though the fear of crime is very high, wealthy people still want to live there and visit there on their holidays. Crime avoidance becomes lifestyle changing, only going to certain places at certain times in certain ways. And importantly because it becomes observable in the urban morphology is the trend that those who can afford it live their lives behind walls and security systems. The downside is that by making the private spaces safer the public spaces become more dangerous because the natural defences supplied by communal mutual security (people looking out for each other) is eroded. It is the role of the police to make law-abiding citizens feel safe on their streets so they do not have to hide.

I am always on the look out for proxy measures for confidence in the police. Urban defensive design had already occurred to me but perhaps I should add a street based cafe culture which really should exist in Recife but appears not to, to my list.
Posted by Paul at Thursday, June 17, 2010 1 comment: 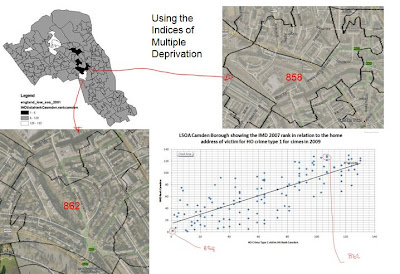 I have discussed the index of multiple deprivation in a previous post. The conclusion was that the crime element did not fit with incivility theories because it did not positively correlation with the multiple indices. This why I find this slide exciting. It shows two LSOAs in the borough of Camden that are next to each other. It just so happens that one - 858 is the second most deprived in Camden and 962 is the fourth least deprived. In the scatter graph this is plotted with y axis showing the ranking of LSOA in the Borough of Camden - 1 is the most deprived, 133 the least. The x axis shows the ranking of number of victims (of crime that occurred anywhere in London but mainly in Camden Borough) of Home Office Type 1 crimes (primary violence related crimes) living in each LSOA with the LSOA with the most victims having rank 1 and the least rank 133. 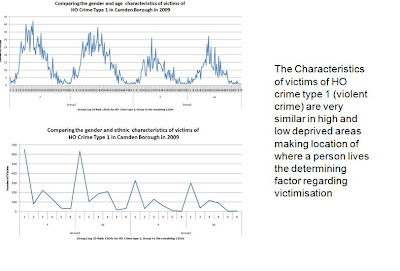 The slide above shows graphs where the victims living in the top twenty ranked LSOAs (group1) for victimisation of Home Office Crime Type 1 crimes are compared with the other 113 LSOA (group 2). It can be seen the that the age, gender and ethnicity distributions are similar. This suggests it is the lifestyle that is aligned to measures of deprivation that are responsible for this variation. 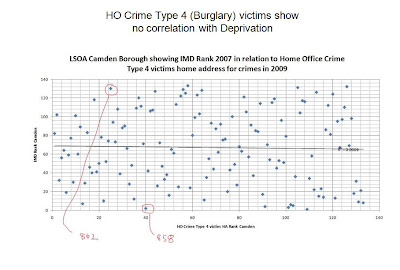 Predictably, if you have read my previous posts, burglary has no similar correlation. If fact the less deprived area of the two LSOAs highlighted has more burglary victims than the more deprived. 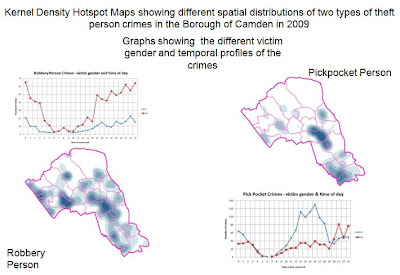 I use this slide in presentations to show how a similar type of crime can have totally different victim and temporal charateristics; also variations in geographic occurance.
Posted by Paul at Monday, June 14, 2010 No comments: