Do you understand crime?

I am sure that 99.999% of the UK population do not understand official crime statistics. In otherwords I am saying out of a population of about 60 million less that 600 people fully understand official crime statistics. In fact I am being generous, I would be surprised if it is more that 60. If someone were to tell me it was less than 6 I would not argue with them. Just to say I do but only because I spent 30 years in the police trying to undestand them and 4 years doing a PhD on the subject. 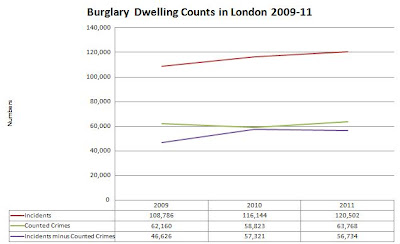 The graph here is the same data but collated by calender year with a table showing the counts. The difference between the two is almost as much as the recorded crime figure. Why are so many reported crimes not not recorded as such? What is more important the incident figure or the counted crime figure?

To answer the first one you will have to read my thesis. The second question can be answered in two ways. Counted or in other-words official police recorded crime statistics are important because that is what is used to make policy decisions by police, politicians and civil servant. But I argue that the incident figures are more important because that more closely reflect the public's perception of the nature and level of crime. The is important because peoples' perceptions affect their actions and their attitudes.


Congratulations to Kevin Hurley, he is the new Police Crime Commissioner (PCC) for Surrey. Our paths have crossed a few times when we both were in the Metropolitan Police Service. He is a thoroughly decent chap from a family full with police officers. Even though he is an independent whose attraction is that he is not a politician he knew that "zero tolerance" is a term that Surrey residents like and put it as his title on the ballot sheet, a very savvy bit of electioneering.
I am a Surrey resident and I would have voted for him if I knew he was standing, but I do not agree with PCCs so a no vote was the best I could do to convey this. I am glad to note though that Kevin stood to keep politics out of policing, something which of course is impossible when politicians are judged on law and order as much as any other issue when national parlaimentary elections come round. At least in Surrey we can be confident that the police will not have to jump through hoops and dance to the tune of a political motivated PCC.﻿
Posted by Paul at Tuesday, November 20, 2012 No comments: