Its a matter of scale 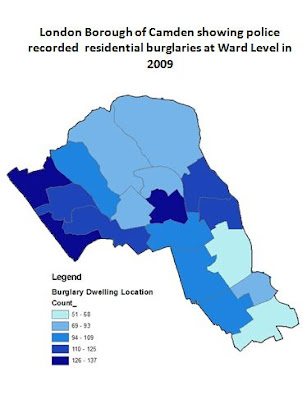 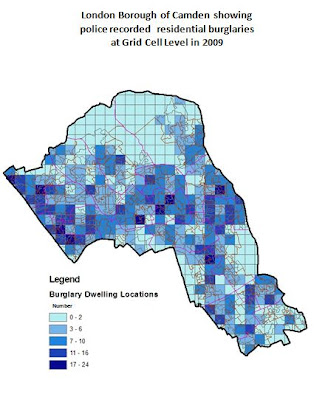 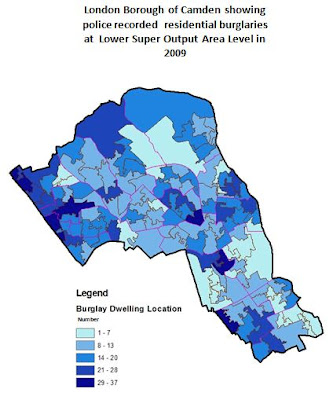 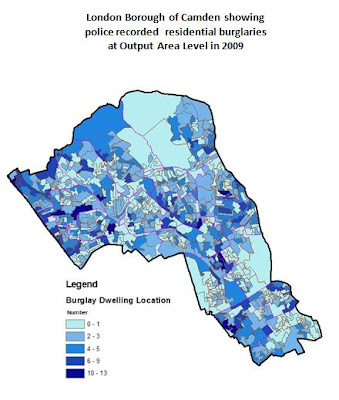 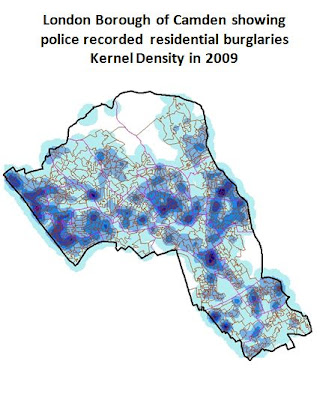 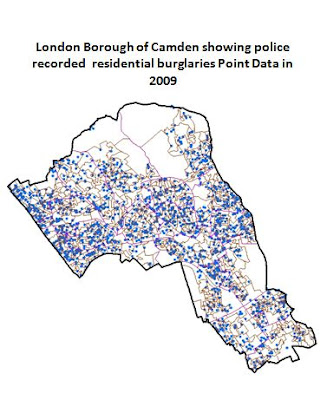 The appropriate scale for my analysis and geovisualisation has been a subject that I have been thinking about a lot recently. The above maps show the alternatives using residential burglary data. Each alternative has advantages and disadvantages which I will discuss in subsequent posts.

Direction of my research

I have just submitted an abstract for the 8th National Crime Mapping Conference. The details of which can be found here.

The following is a copy of that abstract. I include it in the blog because I think it gives a simple overview of the direction of my research. I also clearly identify the London Borough of Camden as my research case study. I hope to post more details of that research over the next couple of weeks.

"The police service in England and Wales operates using at least two different policing styles, operating in parallel. The first is vehicle patrol based, borough wide, reactive response policing which is tasked with attending and dealing with incidents in the minimum possible time. The second is foot patrol-based, ward specific, proactive neighbourhood policing. An over-emphasis on the first to the detriment of the second was blamed for the Reassurance Gap (RG) in 2001.

The RG is the difference between the level of recorded crime and the level of crime the public perceives. Police and policy makers understand that if the RG were allowed to widen, this would have a serious negative influence on the public’s confidence in the police. The solution was to invest in neighbourhood policing on the basis that this change in policing activity would have a positive influence on public confidence.

Increasing the level of public confidence in the police has now become the overarching performance indicator (PI) in England and Wales. No longer can police rely on achieving their performance targets by changing police activities to fit performance measures, as has previously been the case with measures based upon recorded crime and response times. Now the measures are external, and are derived using attitudinal surveys. The direct link between police activity and performance targets has been severed.

The more cynical may suggest that public perceptions are fickle and are manifestations of local geodemographic differences of location, and that as a consequence they have very little to do with police activities. This presentation will discuss the relationship between police activity and public confidence by outlining the results of a detailed study of the London Borough of Camden, using data from the Metropolitan Police Service, Camden Council and the Census of Population, alongside other relevant composite indices.

Five domains of data are compiled by the careful selection of data based on Incivility Theory, the Signal Crime Perspective, and environmental criminology theories. The five domains are:
• public demands on the police
• police activity
• characteristics of victims and offenders
• characteristics of people and places
• attitudinal survey data

The data in each of these domains are location-based and can be mapped at sub-ward level. The first three domains are characterised by detailed temporal data which allow an added dimension to be analysed. Once the data are compiled, variations and similarities between locations (and possibly times) can be identified in order to give indications of how police activities influence public confidence in the police. For instance, are the public more influenced by response times than by police addressing anti-social behaviour problems?

The lessons learnt from the Camden study will be used to create a London wide location based comparison system, that will identify how police might amend their activity patterns in order to increase public confidence."
Posted by Paul at Thursday, March 25, 2010 No comments:

I write this entry in my blog for my own benefit as much as I am writing it for anyone else. I am grappling with the problem of collating and mapping my (ok the MPS) crime and disorder data in a way that it can be analysed with other data, such as census data, geodemographic data and composite indices like the Index of Multiple Deprivation.

Let me try to explain my ideas (which are yet to be fully rounded) about the spatial nature of crime and disorder. Police information systems are becoming increasingly precise in the recording of location which is of course a good thing. The MPS CRIS system that records reported crime provides northing and easting co-ordinates for the location of the crime, address of victim, witnesses, suspects, offenders and other relevant locations. I use these rather than postal addresses (which are also recorded) because as co-ordinates are not related to people in the same way addresses are this helps me with privacy and data protection issues. Even though the location is precisely recorded by a point one metre by one metre the means by which that location is derive is not necessarily so precise. Firstly, depending on the type of crime the exact location of its occurrence has varying degrees of accuracy. A crime that occurs in a residential premises can be reliably pin pointed but what if it happens in a tower block? A number of flats which are on top of each other will have the same point. A crime that happens out in the street, may have an imprecise location due to the memory of of the victim. And then there is the problem of crimes that are continuous, these are mainly crimes relating to drugs, weapons and stolen goods. The location of the offence is normally recorded at the location it is discovered by police, often in the police station after arrest creating unhelpful hotspots. Lastly on this first point, anti-social and disorder type crime tend to be spread over a series of locations because if recorded as a crime the full series will be recorded as one event. The second issue is; even if the crime location is unique and precisely known the way in which the CRIS system allocates location may only be as accurate as the post code (perhaps with street number, I need to enquire) which if this is a business or academic address like UCL may cover a large area of offices and land. So if a bike is stolen in the quad at UCL the co-ordinate location may be the University reception office.

All this creates a slightly deceptive accuracy of crime and disorder point data. I have no real problem with this fuzziness because the research regarding fear of crime, in particular in reference to people's perception of crime and disorder suggests that a crime event has a far greater spatial influence than a point one metre squared.
Posted by Paul at Friday, March 19, 2010 1 comment: 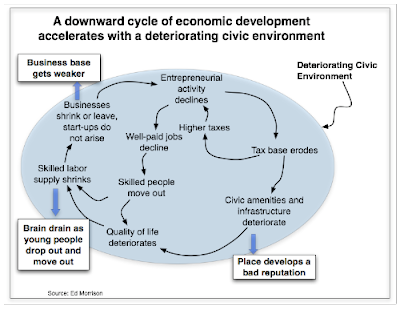 "Denis O'Connor said the failure to properly record and tackle incidents undermined confidence in the police, and called for urgent improvements." This is a quote from the BBC news website about the the headline story that police are not dealing with anti-social behaviour adequately.
BBC, Telegraph, have the most comprehensive reporting of the story. Unfortunately the report the story is based on does not appear to be available on line yet. According to the Telegraph report the Metropolitan Police in London are rated as "good".

There are number of quick points I wish to make.

"People’s perceptions about crime are influenced by the anti social behaviour they observe locally. If the notifiable list were to be reduced (paragraphs 75 to 83), then even less anti social behaviour would be reflected in the national crime statistics. Distrust of the national figures might therefore increase."
The full references can be found here.
The reason why anti-social behaviour is not properly and systematically recorded by police and government is because neither take it seriously enough. It is also worth pointing out that a significant portion of antisocial behaviour legislation is also the responsibility of Local Authorities, some in conjunction with police such as Anti-Social Behaviour Orders and some exclusively such a noise nuisance.
The reason why tackling anti-social behaviour is so important is because when it becomes something that a person cannot avoid because it affects their home, travel to work/school etc. then it leads to worry (see the PAW model). People perceive that police are not doing enough to tackle the problem and this leads to reduced confidence in the police.
The BBC and newspaper reports highlight the tragic case of Fiona Pilkington where the affects of anti-social behaviour on an individual were devastating. There are also important implications for communities. That is why I have included a diagram that simply indicates how anti-social behaviour (incivilities, civic environment) has wider affects. This from Ed Morrison's blog which can be found here.
Posted by Paul at Thursday, March 11, 2010 1 comment: 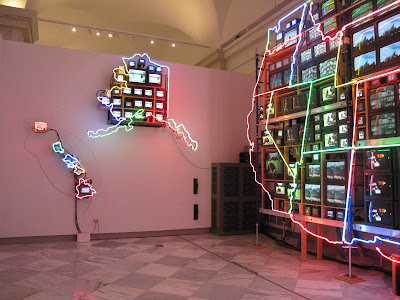 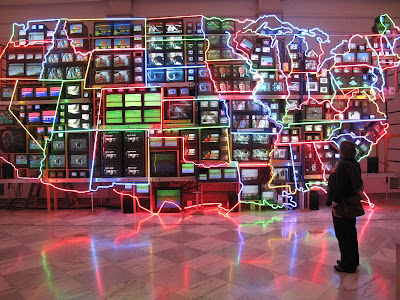 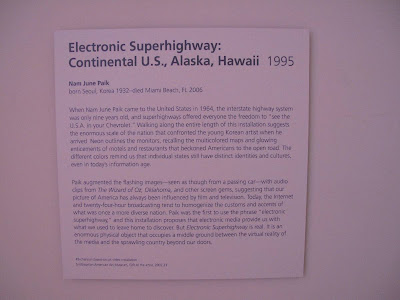 It was an artist who made maps. The bottom picture explains, you may have to click on it to make it larger to read it. Again my pictures, again Washington DC. This time at the The National Museum of American Art.
Posted by Paul at Saturday, March 06, 2010 No comments: 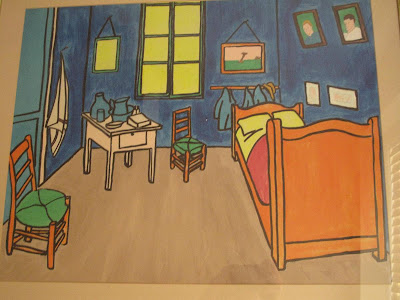 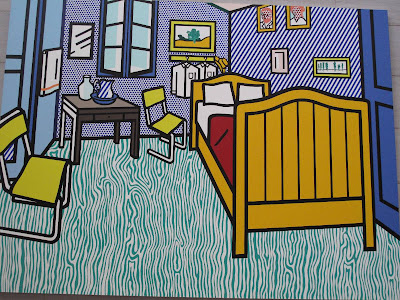 As I write this my version of Vincent van Gogh painting of his bedroom in Arles looks down on me in my study at home. In 1992, about the same time as I was painting my version the American Pop Artist Roy Lichtenstein was painting his version. I saw this and photographed it last week in the excellent National Gallery of Art in Washington DC.
This simple, tranquil painting appears to be one of the favourite paintings of the world's favourite artist. He drew it twice, painted it three times and referred to it in 13 different letters to his brother. It is the only van Gogh painting that includes his own paintings in it: in this version (hanging in Musee D'Orsay,Paris) one of the paintings is of Vincent himself. See here and here for more details.
I include the painting in my blog for four reasons;
Posted by Paul at Friday, March 05, 2010 No comments:

Outlawing the Crime of Fear 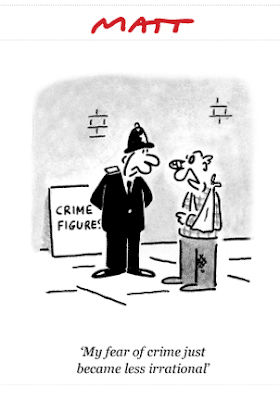 I have been out the country for a few days so I am grateful to James for alerting me to the fact that fear of crime has been in the news in the UK whilst I have been away by sending me this cartoon.

Gordon Brown has accused David Cameron (indirectly) of of being guilty of a "crime of fear". He went on to say "You don't tackle the fear of crime by cultivating it, by ramping up a public sense of panic, by abusing the figures and claiming our society is broken." The story in the Daily Telegraph newspaper can be found here.
This is pure electioneering of course. At least Gordon Brown has a strategy - Neighbourhood Policing with increased foot patrols. The Conservatives have not got past rhetoric yet unless I have missed something. The Conservative Mayor of London, Boris Johnson, sacked the MPS Commissioner (effectively) but has not changed any strategies or policies, reduced the MPS budget and delegated responsibility to a person who seems not to have time to attend monthly meetings.
I am not a great fan of the Labour Party but at least they have invested in policing because they appear to believe that local policing makes a difference. The Conservatives on the other hand may be less liberal in their views on criminals and the causes of crime but tend to see police as more a protector of government and privilege than a force for equality and fairness within local communities.
Posted by Paul at Wednesday, March 03, 2010 No comments: